The building which sits at the junction of Square Ambiorix and rue des Eburons belongs to the architectural ensemble of the “Squares’ district”. It occupies an important position because, with its bow window, it provides the focal point at the end of both the rue John Waterloo Wilson and rue des Eburons. It is also one of the most important ‘town residences’ which make up the north-western part of Square Ambiorix.

Quaker House, seen from the east, looking down the rue des Eburons

The house was built at the turn of the 20th century for the stockbroker, Jean-Julien Van Stappen, whose offices were in the rue de Spa. He evidently wanted a fine residence where he could live with his wife, his two children and his servants and where he could host receptions. He commissioned the architect and designer George Hobé. After 8 decades of different owners and residents, the house has been owned by Quakers since 1985 and houses the Quaker Council for European Affairs.

The exterior, the staircase and the reception rooms on the first floor are almost as they were designed by George Hobé. When you enter, note the size of the staircase which allows daylight to flow into the house. When you look up you can see quite easily that the skylight and hence the house are not perfectly rectangular. The embossed wallpaper which covers the walls of the staircase is of exceptional beauty. 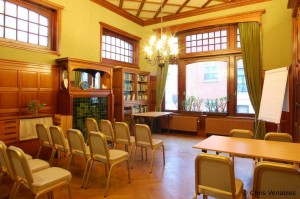 The Dining Room in Quaker House.

On the first floor, enter first into the dining room. The quality of the wood reminds us that George Hobé was the son of a cabinetmaker. The windows, the mirrors, the fireplace and the wood panelling are all original. The doors that separate the dining room from the central reception room are known for their glass panels which are Art Nouveau in style; the crystal panes are of an exceptional purity. Note also the door handles and other details. Like many other architects of the time, Hobé paid as much attention to the details of the interior decoration as to the overall lines of the walls and windows on the outside. 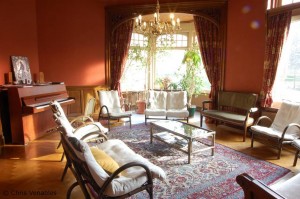 When you enter the reception room at the front you are amazed by the effect of the light provided by the bow window. The room appears to be open to the trees of the park. The bow window also serves to disguise the fact that the house, and this room exceeds a 90o angle (after your visit, compare the paving stones of the pavement and those of the garden.) The mirrored bench seat is also original.

When you leave, don’t forget to go to the corner of the rue des Eburons and see the signature of George Hobé engraved in the stone beneath the bow window.