Terri is a British-Jamaican strategist and facilitator committed to more inclusive, just and people-centred policy and practice. She's worked in foreign policy for over 10 years, mostly for NGOs, civil society networks and think tanks working on peace, but also as a public servant with the European Union's External Action Service, developing the EU's early warning system for conflict prevention.

She specialises in bringing the 'human factor' into policy, programming and advocacy, drawing on learning from behavioural sciences, communications science and social movements. Terri holds an MA in International Politics and Human Rights and specialised in cognitive linguistics, linguistic anthropology, and political communication as an undergraduate. In addition to English as her mother tongue, Terri speaks French, Italian and Flemish (with enthusiasm rather than precision) and a little Arabic from some time living in Jordan. 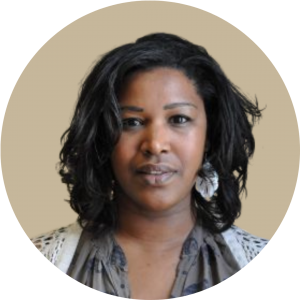