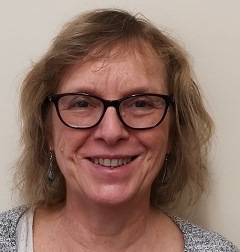 The Quaker Council for European Affairs (QCEA) is pleased to announce the appointment of Tracey Martin as its new Director.

Tracey is a Quaker activist and facilitator who will bring to QCEA over 25 years of management experience in the international development sector, at head office, regional and country levels.

In particular, she is active in peace work and social justice. She was clerk of the Peace Sub-Committee of Quaker Peace and Social Witness of Britain Yearly Meeting as well as of the Quaker World Relations Committee. Tracey is also known for her work at Woodbrooke Quaker Study Centre where she coordinates the peace, social justice and climate crisis work as well as running courses on climate justice, peace and poetry.

“I am delighted to have been asked to serve as director of QCEA. I have long been impressed by the work this small organisation has done and I am excited to be a part of it.”

“These are challenging times. I believe that my work is to build and support a strong team, grounded in Quaker values, that can work together and with others to influence decision-makers in European institutions to work towards peace, equality and just responses to the climate crisis,” she continued.

“QCEA has long had a special place amongst civil society active in the European policy arena. Its advocacy is grounded in Quaker traditions and it brings diverse voices to that arena, deepening mutual understanding. I am delighted that Tracey Martin will come to QCEA as its Director, for she has just the right experience, values and skills to guide QCEA’s work at a critical time for Europe.”

“Inequality, exclusion and militarism are tainting the peace project which the European Union aspires to be, and now the darkening clouds of conflict threaten to distract attention from the climate crisis. Tracey has a tremendous reputation for her work, on peace, social justice and the climate crisis, most recently at Woodbrooke Quaker Study Centre. QCEA’s impact will surely grow as Tracey helps QCEA to focus and be heeded where most it is needed,” Jeremy continued.