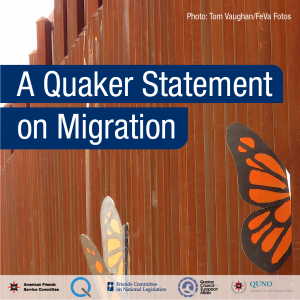 A Quaker Statement on Migration acknowledges that migration is “a fundamental facet of human behaviour. People migrate for many different reasons. The line between chosen and forced migration is frequently blurred by factors including insecurity, desperation, the search for dignity, and the climate crisis. People’s reasons for migrating are often exacerbated by inequalities and by power structures that are built on or have profited from the control of people’s movement”.

Though working methods may differ, the organisations that developed this statement are united by the shared vision expressed in this Statement:

We are committed to working for a world where dignity and rights are upheld regardless of migration status and not on the basis of citizenship or perceived deservedness. Our faith calls us to work alone and with others for migration justice.

We encourage Meetings, Quaker organisations, and Friends’ groups or associations to consider supporting the statement and signing on to it by contacting the Quaker UN Office’s Human Rights and Refugees team: Laurel Townhead at ltownhead@quno.ch and Najmah Ali at nali@quno.ch

A Quaker Statement On Migration

Our Work on Migration