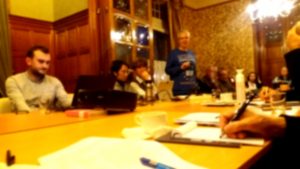 QCEA’s governing body, the General Assembly, met in Brussels on 15 and 16 March 2019. This statement was agreed at the end of their meeting.

To all Friends everywhere.

The staff, Executive Committee and representatives from ten countries met in Brussels in a spirit of confidence in the dedicated work of QCEA, but also very conscious of the increasing challenges to Quaker ideals in European politics.

Jude Kirton-Darling, one of the two Quaker MEPs, gave us an outline of these challenges on the first evening and opened our debate on how to be effective in this atmosphere of false information and separatism. Brexit is of course much on our minds and we have reflected on the initial European ideal, beginning with great vision for Peace and Human Rights. The European Union is not the failed project that some like to portray, but this is a crossroads moment as we head into the parliamentary elections in May. We recognized the need to call out Brexit for what it is and to challenge movements financed by the far right, designed to undermine European cohesion.

Our challenge is to elaborate and publicise a different story to counteract this deliberate fear mongering and misleading narratives. QCEA is a unique voice in Brussels and beyond, able to form wide connections between civil society and the European Institutions.

The European Council now plays a more dominant role in comparison to the Commission. This has resulted in policy becoming more politicised. At the same time, more extreme political movements on the left and right of the European Parliament make cross-party initiatives more difficult. This has an impact on many policy areas including military spending and migration policy.

It’s heartening to see the effective work of QCEA in these areas and especially at the moment in its publications. The new site chooserespect.eu is an initiative that proposes Twitter responses to tackle anti-migrant hate speech, and provides myth-busting information and a positive narrative tool kit to counter the great influence of false and prejudiced information online.

As ever, various initiatives of quiet diplomacy continue to build QCEA’s reputation as a provider of safe and honest spaces. This is equally true of both the Human Rights and the Peace Programmes. Our networking and publications are very positive results of the work of QCEA, but we are also seeking to tailor our advocacy in a rapidly changing and increasingly segregated political environment. Despite some significant success with, for example, the reception of our reports on child immigration detention, and the acceptance of substantial input from QCEA into the EU policy on border management, the distance between ‘the people’ and the corridors of power is growing, which requires a lot of time and work to bridge.

We are concerned that we may be mitigating only a few parts of what is a large scale deteriorating social and political environment. This weekend we have heard tragic news of the Christchurch shooting in Aotearoa / New Zealand, and consider the importance of compassion and tolerance in condemning violent attacks. Are our good alternative stories enough? Are we getting heard enough? In times which echo the rise of fascism of the 1920s and the revolutionary movements of the late 60s we take heart from the history of Quaker involvement at those times and encourage that these stories are used to support a new generation’s actions. Youth strike for Climate is a hugely powerful and positive example of young people making change.

We are proud of the work of QCEA in this last year, and appreciate that it is more cost-effective and ambitious in its programme than many better-funded organisations. However, we know that extra funds are needed to continue this important work, in the name of all European Friends. Part of the solution is the work of support groups in individual countries and we hope this will increase, help in research, and reinforce the cross-flow of information to all Yearly Meetings, and enhance their role in fund-raising.

We considered the ways in which we, as ambassadors in our home countries and communities, can continue to promote the work of QCEA.

How can we uphold each other thinking about resilience for the long road? We need to speak truth to power, but also speak love to power. We ask Friends everywhere to join us and rise to the challenges facing us.